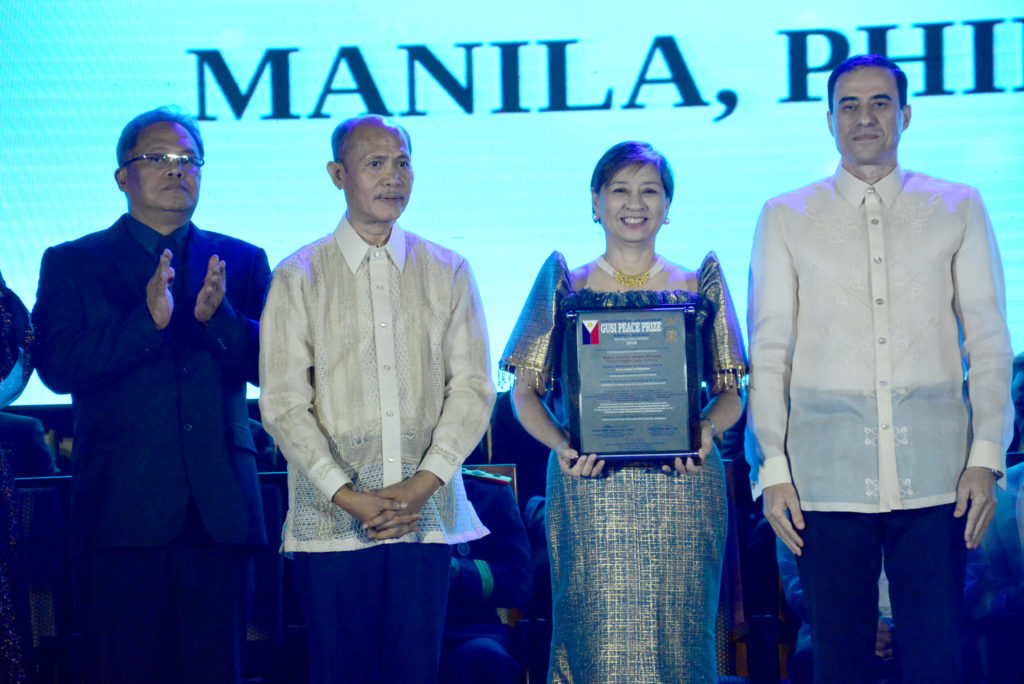 Dr. Caroline Marian S. Enriquez, President of Our Lady of Fatima University (OLFU), was hailed as one of the distinguished laureates of the Gusi Peace Prize International for 2019.

Dr. Enriquez was awarded with the Gusi Peace Prize because of her exemplary and visionary leadership in the academe as a prime mover towards a more innovative and globally recognized Philippine education system, and for her significant efforts towards the attainment of peace in society.

In the glittering awards rites held on 27 November 2019 at the Philippine International Convention Center in Pasay City, Dr. Enriquez humbly accepted the award together with 18 other laureates from all around the world, mostly politicians, diplomats, physicians and acknowledged global leaders. Aside from Dr. Enriquez, the other Filipino Gusi Peace Prize laureate is Francisco “Isko Moreno” Domagoso, Mayor of the City of Manila. In her acceptance speech, Dr. Enriquez pointed to OLFU as the pillar of her aspirations and vision for the young generation. “They (OLFU) have supported me in everything that I have been doing for the sake of educating the Filipino youth. For and in behalf of all the students, old and young alike, please consider education as a catalyst for improving your lives,” she said. “My whole life has been dedicated to education, and I believe that this is one way of transforming lives, as well as contributing to nation-building,” added the esteemed educator.

Dr. Enriquez is no stranger when it comes to leading the pursuit of excellence in education and uplifting the lives of students and individuals in society. She is the current president of the Philippine Association of Colleges and Universities (PACU) and was also bestowed with an Education Leadership Award by the Asian Confederation of Businesses (ACB) and CMO Asia for “excellence in application of leadership principles to business situations.” The Friends for Cultural Concerns of the Philippines (FCCP) also lauded Dr. Enriquez as a Distinguished Leader of the Academe for her efforts in furthering Filipino culture and arts in the young.

She was also instrumental in the continuing expansion efforts of OLFU. Last August 2019, Dr. Enriquez led the way in affirming OLFU’s commitment to better and world-class education for Filipino students with the inauguration of the Research, Innovation, Science and Enterprise Tower, or simply the “RISE” Tower located in Marulas, Valenzuela City. The highly advanced, 8-storey building serves as an integrated academic space where theories are experienced and put into play. RISE Tower houses various simulation laboratories and collaborative areas with cutting-edge equipment and technologies.

Dr. Enriquez also spearheaded OLFU’s “50 Homes for Fatima’s 50 Glorious Years” project in partnership with Habitat for Humanity. OLFU helped fund the construction of 50 homes and make a difference in the lives of 50 families, in conjunction with the celebration of the school’s 50th founding anniversary in 2017 and its vision of “improving man as man.” The first 12 homes are located at Northville 2 in Bignay, Valenzuela City, while 33 homes have risen in Bistekville 5, Quezon City. Construction of the remaining five is currently underway.

The Gusi Peace Prize traces its roots through the valiant efforts of Capt. Gemeniano Javier Gusi, a World War II guerilla who fought against Japanese oppressors, and became a politician and staunch human rights advocate. The Gusi Peace Prize aims “to honor individuals and organizations who have given exemplary contributions to global peace and progress through world brotherhood, and by using their God-given talents for the benefit of mankind.” Its awarding ceremony is held every 4th Wednesday of November, declared as the Gusi Peace Prize International Friendship Day by virtue of Presidential Proclamation No. 1476, signed by then-President Gloria Macapagal-Arroyo. In its continuous quest towards progressive development, Our Lady of Fatima University (Valenzuela, Quezon City, and Antipolo) was… College of Medicine receives accreditation from The Medical Council of Thailand On 10 February 2020, Our Lady of Fatima University (OLFU) Pampanga Campus’ College of Nursing formally established a… One of the values that Our Lady of Fatima University (OLFU) teaches its students is compassion. As OLFU… Last 13 January 2020, a Memorandum of Understanding (MOU) for academic partnership between Our Lady of Fatima University…